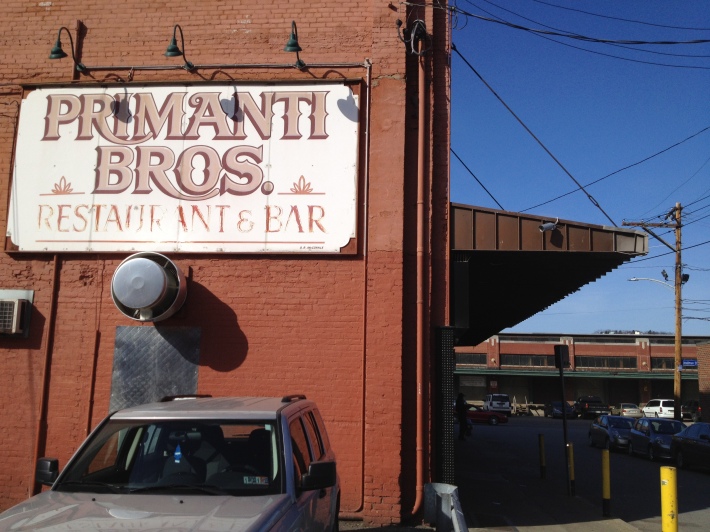 The outside of the legendary establishment.

On February 26th, 2011, the web address www.pennwich.wordpress.com became unavailable. I’ve been writing PittWich for one year, encompassing 30 different sandwiches spread across the Pittsburgh area (with a few stops on the eastern PA counterpart), and have demonstrated significant restraint in waiting the entire year to review what is undoubtably, unquestionably, unequivocally the most storied chapter in Pittsburgh cuisine: the Primanti Bros. sandwich.

While there are now seventeen different Primanti Bros. locations in Pittsburgh, the original is located down in the culturally explosive Strip District on 18th Street. Don’t worry, it’s a typical little Pittsburgh side street; you can’t miss the place. However, it wasn’t always located in this little hole-in-the-wall on 18th; the story of the Primanti’s sandwich actually dates back to the 1930s and a street cart. The original year isn’t exactly known, seeing as it dates back more than eight decades, but in the early 30s, Joe Primanti opened a cart in the Strip and started selling sandwiches to truckers. Apparently the idea took off, because he soon moved to the current 18th Street establishment in 1933, with operating hours from 3 AM to 3 PM, so as to cater to the off-beat hours of truckers and their equally unusual eating habits/dinner times when on the road. Soon his brothers, Dick and Stanley, joined up, along with his nephew John DePriter who became the cook. And just like that, the brothers Primanti had created Primanti Bros. sandwiches.

Now, according to the Primanti Bros. website, the story behind the creation of the legendary sandwich itself goes a little something like this:

According to John, “One winter, a fella drove in with a load of potatoes. He brought a few of ’em over to the restaurant to see if they were frozen. I fried the potatoes on our grill and they looked pretty good. A few of our customers asked for them, so I put the potatoes on their sandwiches.”

It was this simple and yet ingenious combination that has led to the notion shared across America that everything food-related made in Pittsburgh comes loaded with french fries. The brothers never looked back; if they had, they would’ve realized that they’d just made culinary and cultural history.

It doesn’t matter which Primanti’s shop you go to, they all serve the same food and have the same high sandwich quality (believe me, I’ve tried), but if you’re going to sample the legend for the first time, you oughta do it right and head down to 46 18th Street. So, naturally, that’s where I headed when it was time to pay homage to this brilliant ‘wich.

A diagram of the architecture of a Primanti Bros. sandwich.

As shown above, contrary to popular belief, the sandwich itself isn’t just composed of italian bread, french fries and cole slaw: there’s actually meat on these things! You get to choose from a wide variety of meats and fillers: 21, to be exact. They range from knockwurst and cheese (no, I don’t know why you’d do that) to “Imported sardine and cheese” (no, I really don’t know why you’d do that.) However, aside from the oddities, they’re all classic sandwich fillers: you have basically any deli meat you could possibly think of and then some. My two personal favorites are the hot sausage, which packs a good kick and has that great sausage snap, and the Pittsburgher Cheese Steak, which is listed on the menu as the “#2 best seller.” Here’s a little “secret”: that’s an inside joke. The cheese steak is actually their most popular sandwich, but they list as the #2 best seller because the #1 is Iron City beer. (Get it? It’s funny. Because people like to drink beer. Moving on.)

Anyway, that’s the story behind the legendary Primanti Bros. sandwich shop. With such a storied part of Pittsburgh’s culinary culture, it’s good to not only eat the ‘wich but also understand the historical significance and the way it came to be today. That being said, I know the true star of this extravaganza is the actual ‘wich review.

The behemoth, the stuff of legend: the ‘wich itself.

A Primanti Bros. sandwich is intimidating at first, and then you pick it up and realize that it’s entirely manageable. All you have to do is get a good, firm grip and give it a press, and all of a sudden it’s a realistically-sized ‘wich. This is because of the first ingredient, the italian bread. The bread is important to the sandwich: it has that good, clean taste of italian bread that makes more than satisfactory bookends but doesn’t try to monopolize the flavor of the sandwich the way a rye bread does. It’s just there to maintain the form factor of a sandwich, and the fact that it’s a bread with some give makes it easier to eat the behemoth ‘wich.

Then we move on to the inside, starting with the single ingredient that doesn’t blow your socks, your second pair of socks, and your shoes off. The tomatoes aren’t the most exciting part of the sandwich (in fact, they’re the least exciting part) but they, too, play a role in the sandwich. Acidity is always key when you’re dealing with a salty, savory sandwich, and in this case (loaded with french fries and a nice patty of steak-burger) the acidity comes through as much as possible, making sure to even the flavors out nicely.

However, the best part of the flavor contrast comes in the form of the sweet n‘ sour cole slaw. I’ve never eaten a sweet n‘ sour slaw by itself, mainly because I prefer the creamier counterpart, but on a Primanti’s sandwich, this is the perfect choice. The bite that the slaw has really does the job of the tomato in cutting the salty ingredients, and that’s only one third of its job. Next, the slaw brings a coolness in temperature that doesn’t exist anywhere else on the ‘wich so that when you take the perfect bite, you have both hot and cold ingredients going on at once, making for a more interesting taste. And, finally, the slaw plays a role in my favorite department, the Department of Texture. While the rest of this sandwich has a pleasant chew to it (see: meat, potatoes, tomatoes, bread), the slaw brings a distinctly different texture in the form of a crunch. By doing this, all three features of the slaw bring a new factor to the ‘wich, leaving me no choice but to declare it my favorite sandwich topping of all time.

Still, not to be outdone by it’s crunchy companion, the french fries are also a huge part of both the storied architecture of the sandwich and the flavors going on within the ‘wich. If these sandwiches were to consist of just the cole slaw, tomatoes, meat and bread, the salt and savory quotient in the final product would be far outweighed by the acidic component, which is where the fries come in. They provide that distinctly Pittsburgh notion of piling french fries on literally everything while also adding the extra counter to the sweet n‘ sour n‘ acidic duo of the slaw and tomatoes. Really, the two parts acidic/cool and two parts salty/hot combination that the sandwich provides is the perfect one-to-one ratio in terms of sandwichcraft. (That is now a word. Period. No questions asked.)

And of course we have the Pittsburgher Cheese Steak, the meat portion of the sandwich. To be honest, the cheese steak is the perfect Primanti Bros. sandwich to get for your first because it’s not too flamboyant or in-your-face of a meat. You can certainly tell with every bite that there’s an extra little savory going on in the ‘wich, but it kind of sits back and lets the ingredients that top it do the talking, almost like the patty on an elaborate cheeseburger. The cheese steak here reminds me a lot of the flavors and consistency of a burger patty, but made of steak. The meaty tones are subtle and yet delicious, and when you combine the calm meat with the rest of the toppings, they mesh perfectly.

How your wax paper should look at the end.

The first 30 sandwiches I reviewed here on PittWich are more than respectably delicious ‘wiches, don’t get me wrong, and I’d immediately recommend every single one to anybody visiting Pittsburgh (or, to a lesser extent, Philadelphia and New Jersey.) However, there’s no question that if you want to eat a sandwich in Pittsburgh, Primanti is the first name you’re gonna hear. First, the spectacle and novelty of putting cole slaw and french fries on top of your sandwich, rather than next to it, draws in any tourists and adventurous food folk. And then you actually eat the thing, and there’s nothing like it. The Primanti Bros. sandwich is in a league of its own, and is something any connoisseur of things sandwich- and/or Pittsburgh-related should be obligated by law to try. Trust me, you’ll be more than happy that you did.